I’ve been away on secondment and truthfully quite sh*t at multi-tasking. Sorry for being absent awhile. New posts to come.

Doing another job for a few months has me wondering about purpose and contribution. How do you decide where best to direct your efforts?

I’m at a crossroads… anyone care to join me there for a picnic? 😉

More soon and thanks for keeping me entertained with your posts while I’ve been travelling!

The man sitting across from me on the train this morning was obviously a writer. He pulled out his notebook and scribbled in fits and starts, breaking only to stare intently at the people squeezed in around us. After an hour of watching him watching others, and surreptitiously admiring his collection of observations and sketchy drawings, I asked him, “what are you writing this morning?”

You know what he said? Eyes wide in terror or arrogance, I couldn’t tell, he said, “Oh, I’m just a PA [personal assistant] and… uh… forgot my laptop and so I’m writing lists.” Bollocks!

What inspired him to lie? The jig was up but he clung to his stealth.

He wasn’t the shy sort, so perhaps he wanted to avoid liability because his scathing observations will appear in a blog post or book. Maybe he was cooking something to rival the women who eat on tubes fiasco? Ha!

His behavior begs the question, would you admit to being a writer? Is it something you positively identify with or try to bury beneath your other assets?

Whatever his reasons, he was no writing ninja. And I’m a bastard for reading his work. 😉

Welcome to the fickle pen! 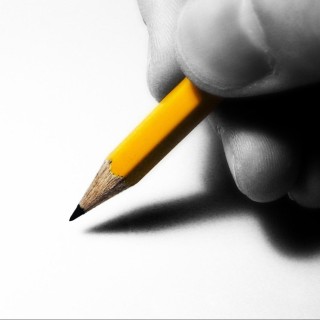 The fickle pen is a journalist by day, and anonymous blog writer when procrastinating. The fickle pen writes what it wants, when it wants. Love it, hate it, or fancy sharing your thoughts? Get in touch by posting a comment and the pen will eventually reply.